less than the cost of Facebook's eCPM

less than Facebook's Cost Per Purchase

The Story
Kitsch was looking to find a new channel to hit their desired ROAS at scale and were able to find success quickly on Snapchat. To showcase their large selection of items, Kitsch utilized Snapchat’s Collection Ads to help drive purchases of their top-performing products.
The Solution
During the first month, Kitsch saw promising results that prompted them to increase their budget to a five figure ad spend within the first 30 days of launching ads on Snapchat. They saw over a 6x ROAS on Collection Ads alone. Not only were they able to scale budgets effectively and efficiently, they were also able to tap into audiences they couldn’t reach on other platforms. Over 29% of purchases came from a young female demographic of 13-17 years old1, a demographic that did not perform well on other platforms.

Kitsch has a wide variety of items for sale. Getting all those products in front of Prospecting audiences was a challenge. Kitsch utilized Collection Ads to showcase their products and leveraged the Snap Pixel to unlock Pixel-Purchase goal-based bidding so they could optimize efficiently based on sales. This ultimately drove 5x ROAS in Prospecting tactics alone to broad female audiences1.
Their highest spending ad in their Collection campaign drove a 6.23 ROAS and over 5,000 purchases1. Kitsch simply highlighted the multiple styles of the product by utilizing the Collection Ads placement to drive consideration and eventually purchase.
This year, Kitsch also launched their own set of reusable and cotton face masks, which drove huge returns on Snapchat. Their top performing ad, which showcased user generated content, helped scale their mask campaigns, driving 5x ROAS alone (eCPSU was a mere 3% of their Facebook eCPM) and over 6,000 Purchases1. 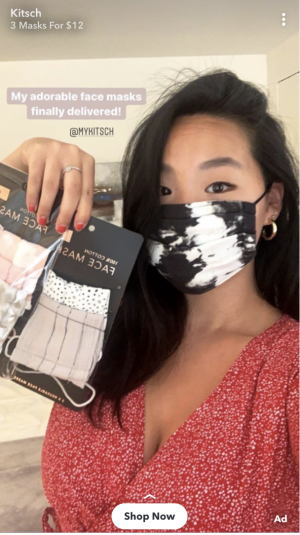 The Result
Snapchat Ads have helped Kitsch to improve ROAS by over 50% compared to other platforms2. In their Collection Ads campaign alone, one of the greatest achievements is that they reached an incremental female audience, between 18-24 years old who drove the bulk of performance. In this age group, Kitsch saw a 20% increase in purchases with Snapchat. Overall, purchases increased by 71% across all females 18+1.
"We were so excited to be able to double our marketing investment on Snapchat within 1 month of running ads after seeing how greatly our products resonated with Snap's audience. After partnering with Snapchat media buying and ad creative expert Savannah Sanchez, we were able to see Snapchat ads performing for us right out of the gate. Snap has allowed us to reach a new audience in the 13-24 age group, which has helped grow our business. It's great to see that Snapchat revenue now represents a significant portion of our site-wide monthly revenue."
- Jeremy Thurswell, COO

Create your first ad in less than five minutes, with just a photo and a few clicks. Reach an engaged audience that lives only on Snapchat, and drive results to build and scale your business.