What Snapchatters around the world are saying and doing about Coronavirus

As news about Coronavirus has dominated global conversation, we asked Snapchatters around the world how the pandemic has affected them. Due to the rapidly evolving nature of the virus, this data reflects Snapchatters’ opinions at a specific moment in time. The following insights were informed by our recent in-app survey on Coronavirus along with top trends from Snapchat Search, Sticker Search data, public Snap captions, and Our Story submission captions.

Staying Connected While Staying Inside

As more Snapchatters opt to stay inside, they’ve been spending more time on their phones to stay connected with family and friends. Younger Snapchatters in particular are communicating via Snapchat, with teens in Canada (58%), the Netherlands (44%), Norway (66%), the UK (60%), Sweden (44%), and France (64%) using the platform more to close the virtual gap between real friends, family, and loved ones. 1 Snapchatters in the Netherlands (50%), Norway (43%), and the UK (50%) have been texting more to keep in touch. 2   Snapchat, phone calls, and video chats are also seeing higher numbers since the outbreak. 3 This behavior follows a global trend in new app downloads—video conferencing apps like Zoom have seen a 67% increase in active users since the outbreak began. 4

One of the biggest shifts among Snapchatters has been an increase in germ awareness. The majority of Snapchatters around the world agreed that they are more informed on the spread of germs than they were a month ago. 9 92% of Snapchatters over the age of 35 in Norway agree that they're more aware of how to prevent spreading germs, compared to a month ago. 10 Meanwhile, teens in Canada (66% under the age of 18, 65% 18–20 years old) and Australia (70% 13–17 years old) say they are more aware of how to prevent the spread of germs today, compared to a month ago. 11 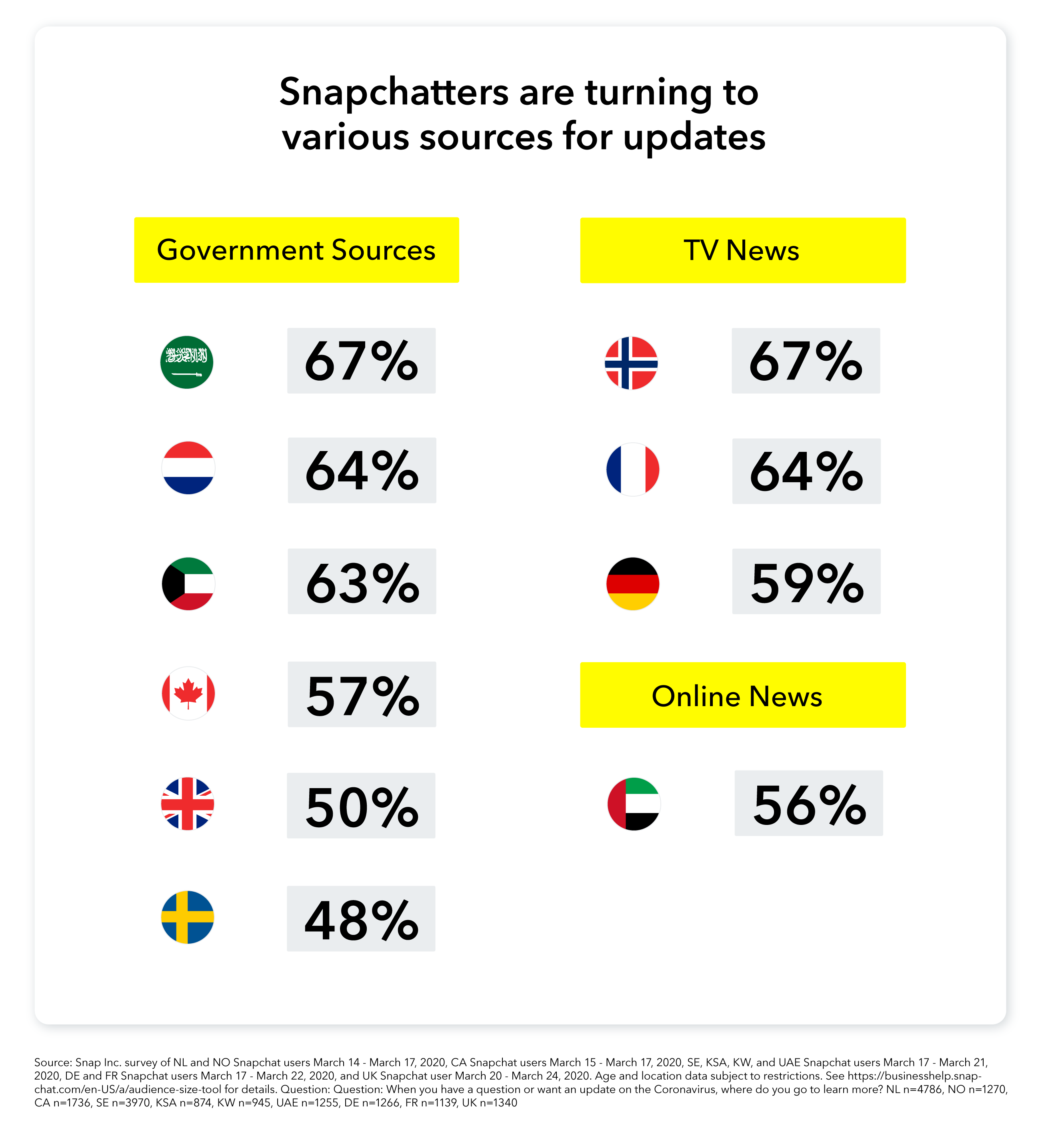 A big question on Snapchatters’ minds is how long this disruption will last.

Most Snapchatters in the UK (82%), Netherlands (76%), Germany (60%), Canada (58%), Norway (59%), and Sweden (71%) expect to feel disrupted for at least a month. 18 Snapchatters in Saudi Arabia (48%), Kuwait (36%), and the United Arab Emirates (36%) believe they’ll be out of the woods in four weeks or less. 19 Snapchatters’ thoughts about when a sense of normalcy will return are heavily influenced by the daily media coverage and real-time updates concerning the pandemic.

Staying inside has resulted in some serious adjustments to Snapchatters’ daily routines, especially as much of their lives shift online. When asked what they’re doing more of since the outbreak, most Snapchatters pointed to streaming shows and movies, with gaming coming in a close second. 20 Male Snapchatters are more likely to break out the controllers than female Snapchatters, especially in the UK where 54% of men are firing up their consoles compared to 23% of women. 21 Online shopping has seen a slight uptick, and food and grocery orders are also on the rise across markets. 22 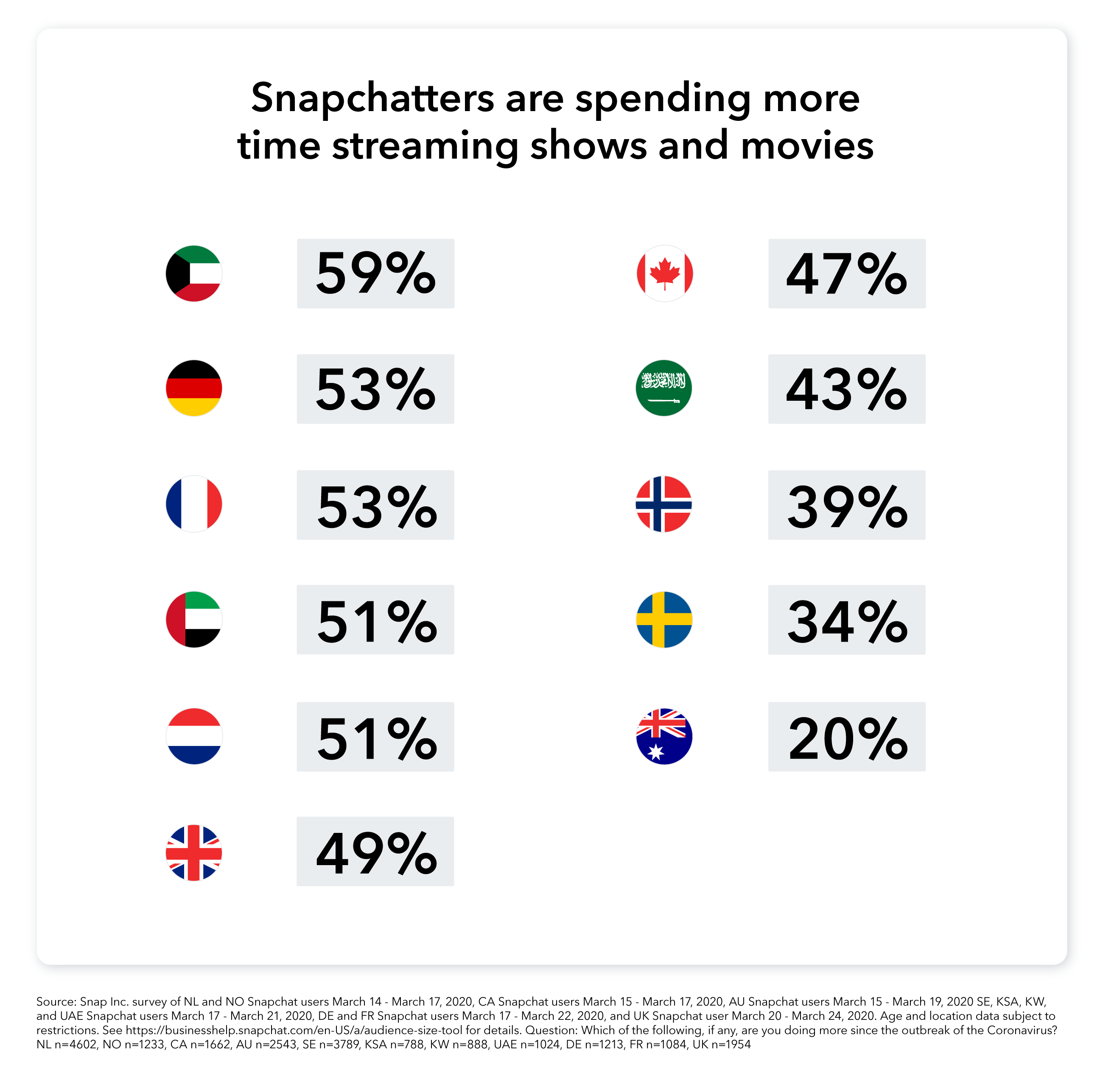 Snapchatters around the world are using multiple platforms in an effort to stay informed and keep themselves safe. With plans like concerts and sporting events on hold, they are using Snapchat to stay connected from the safety of their homes. Despite everything that’s going on, Snapchatters are finding new ways to make it work.