Snapchat's Most Inspiring AR Campaigns of 2020 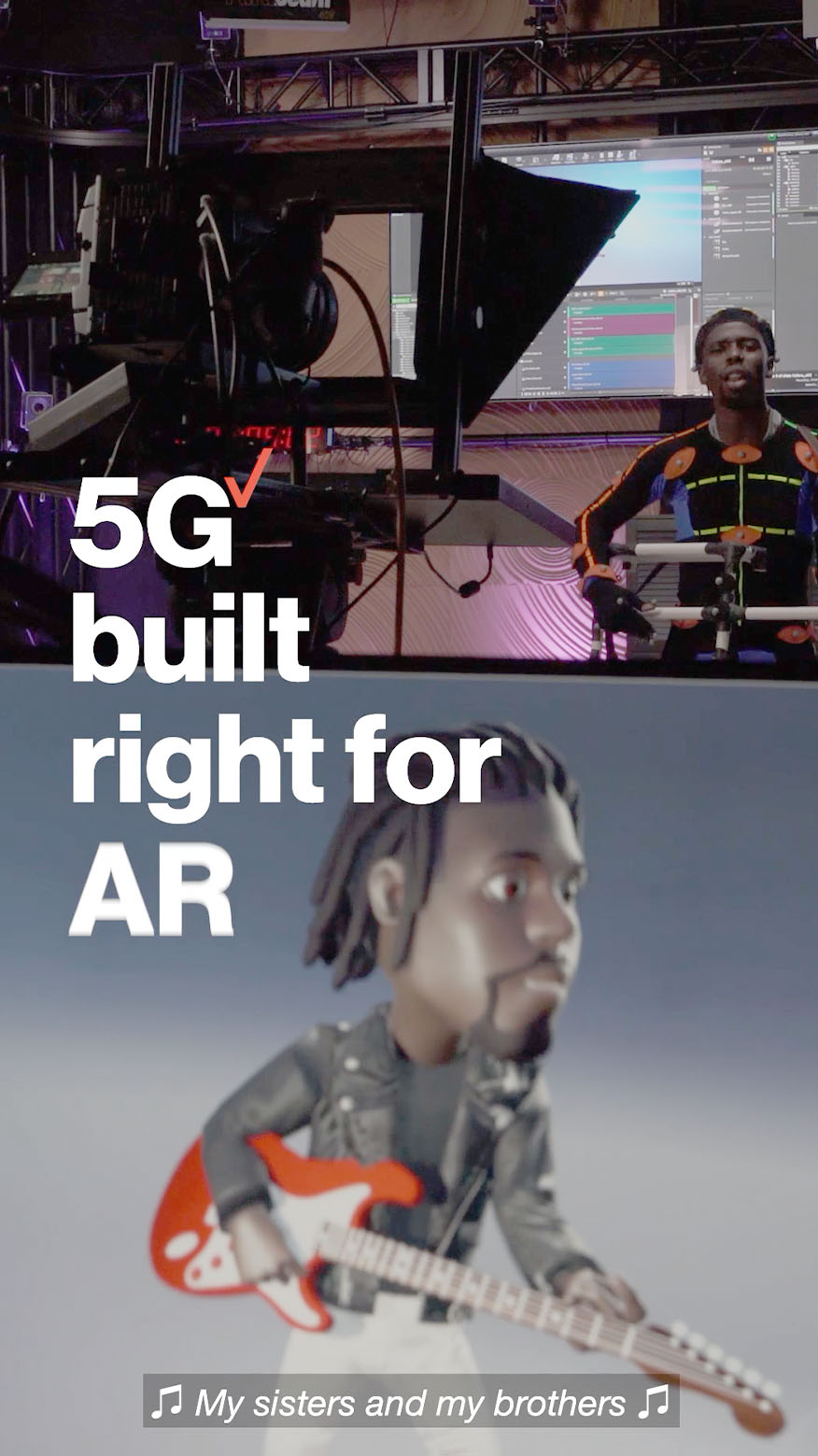 2020 has been a year of the unexpected, from stay-at-home orders to major shifts in consumer behavior and in how brands, businesses and organizations operate. In a year of new normals, Snapchat’s camera has played a pivotal role in bringing us together, even when we’re apart. Snapchatters are no stranger to having fun and being creative with the camera, and are constantly spreading positivity in their communities. This year more than ever, Snapchatters and brands have used the camera to connect with friends and loved ones all over the world in new, creative ways.
AR has played a massive role in creating those connections and experiences. Brands and organizations around the world have leveraged our technology to engage with the Snapchat Generation in innovative ways never before possible.
Today, we’re celebrating some of the most inspiring AR campaigns that our partners brought to life in 2020:
Gucci Debuts AR Shoe Try-on
Snapchat partnered with Gucci for its first-ever global AR shoe “try-on” campaign, using SnapML technology to let Snapchatters virtually try on Gucci shoes. After seeing how they looked reppin’ the brand’s latest sneakers, Snapchatters were able to purchase the shoes directly from the Lens via a “Shop Now” button, generating positive ROAS as a result. 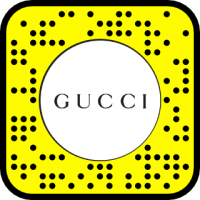 NYX Professional Makeup Virtual Store + Try-on Experience
NYX Professional Makeup and Snapchat launched the first-ever virtual beauty product drop on the platform with an end-to-end shopping experience. The Snapchat-powered virtual store allowed consumers to dive into a fully immersive shopping experience that included try-on and gaming that could be experienced on both Snapchat and Triller. 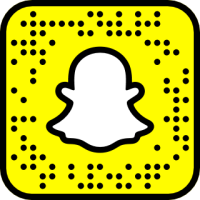 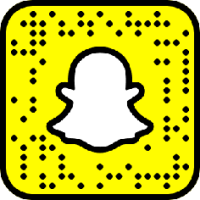 Rebuild Foundation lets you “Raise Your Voice”
Rebuild Foundation partnered with Snapchat to launch an artist collaboration and app takeover inspired by the Black Lives Matter movement and Coronavirus crisis. The campaign gave Snapchatters the ability to wear custom AR masks, accessorize their Bitmoji avatars, and buy physical masks to support Black artists. Rebuild also used Landmarker tech to reveal AR artwork at the US Capitol Building for Snapchatters during the anniversary of the March on Washington. 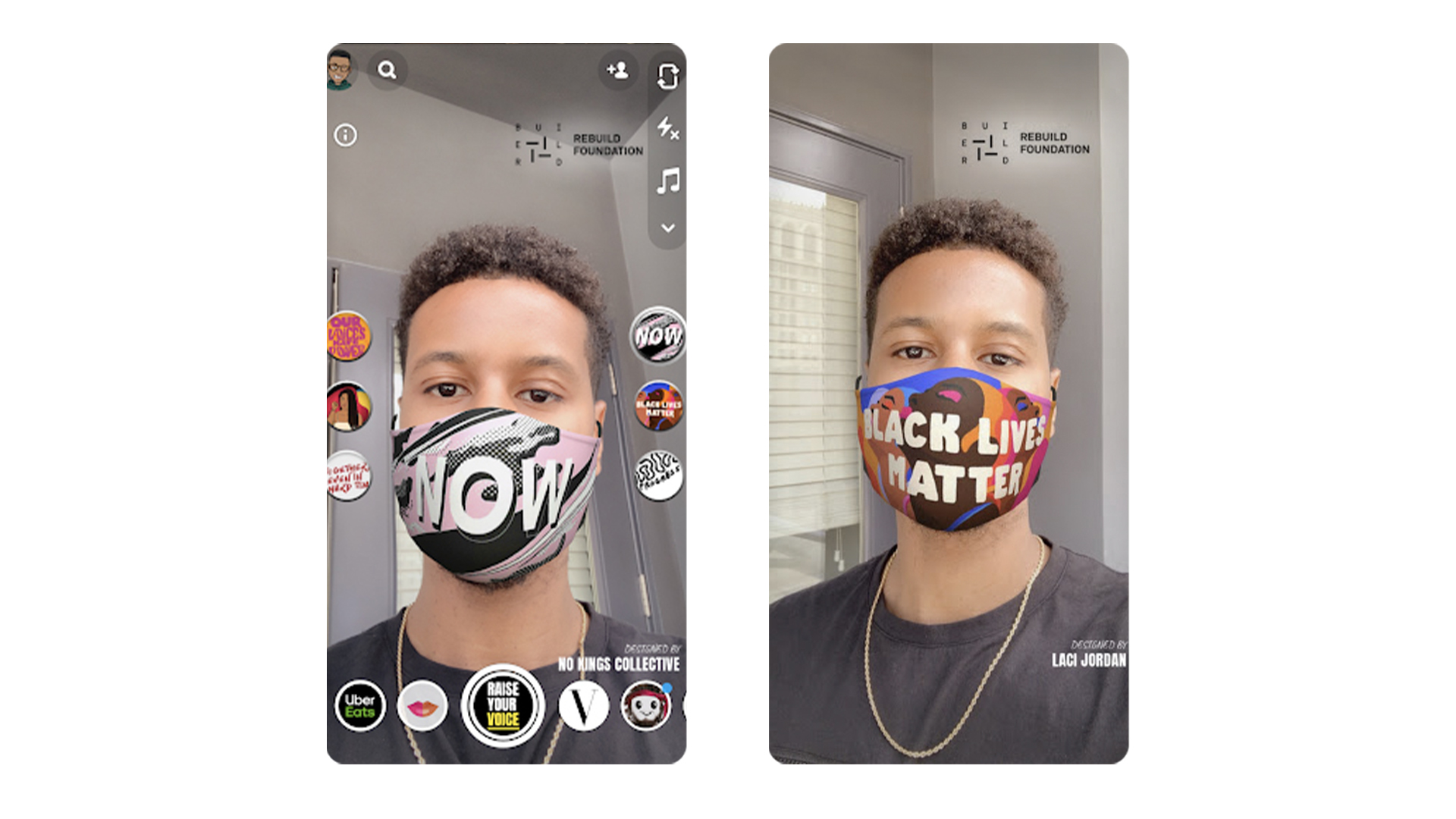 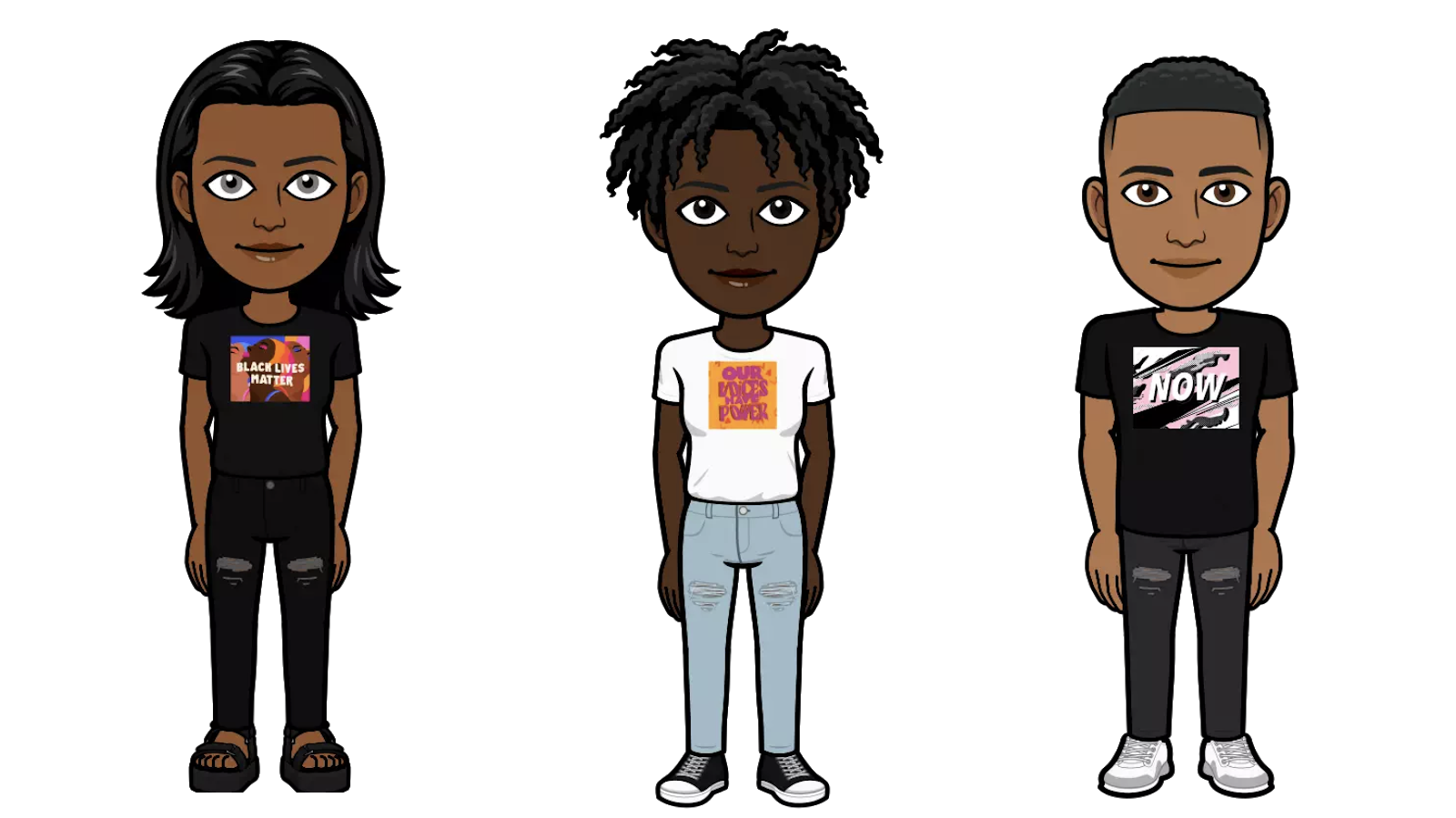 WHO Global Donation Lens
The United Nations and World Health Organization launched the first-ever global donation AR Lens to raise awareness about the critical resources needed in the initial stages of the pandemic. The experience was triggered by scanning international currency notes, making the call-to-action feel clear and urgent. In total, the Snapchat camera was trained to enable 23 currency notes from across 33 countries to initiate an AR experience that was translated into 11 different languages. Around the world, Snapchatters were encouraged to donate to the COVID-19 Solidarity Response Fund to support patient care, medical supplies and research & development at a time when public funding was particularly important. 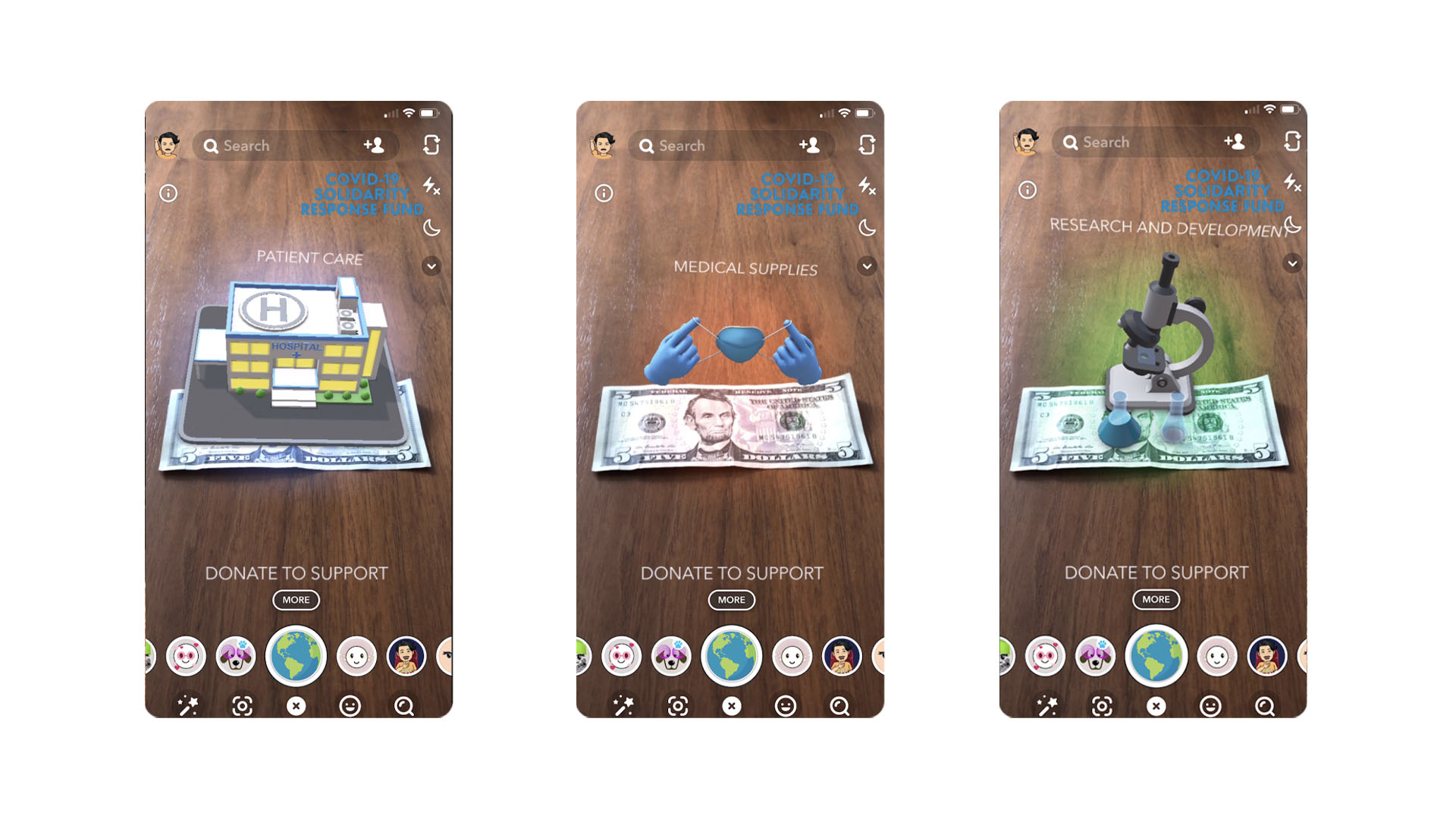 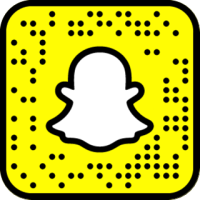 Biden-Harris Campaign Encourages Mail-In Voting with USPS
To encourage Snapchatters to vote early by mail for Joe Biden and Kamala Harris, the Biden-Harris campaign ran a Snapchat campaign to unlock a lens experience by scanning the USPS logo. Snapchatters could see themselves in a Biden hat and shirt wearing Joe’s iconic aviators, and the rear camera activated an icon over the USPS logo that erupted into fireworks reading “Vote Early for Biden-Harris.” 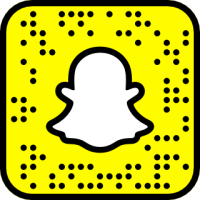 Ralph Lauren Augmented Retail
In 2020, Ralph Lauren partnered with Snapchat to take their retail brand digital. In August, the pair worked with Bitmoji to launch a global Bitmoji fashion collection featuring Ralph Lauren's iconic outfits, and for the Holidays, the iconic Pony was brought to life with Snapchat Scan. A simple scan of the logo still triggers an AR experience in real-time. 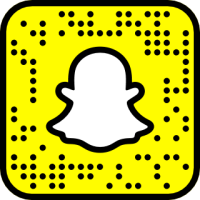 LA Rams AR Uniform Reveal
Two weeks before their hyped-up uniform drop, COVID-19 forced the Rams to cancel in-person plans for the big reveal. So, at a time when the team couldn’t be with their fans, we created the first-ever AR uniform reveal, using the power of the Snapchat camera to give Rams and NFL fans across the country a way to get up close and personal with the team’s bold new look. 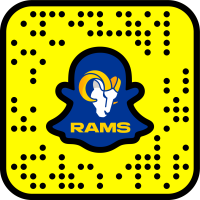 Diwali Festival of Lights by OnePlus
Due to COVID-19 restrictions, Diwali in India this year was a ‘balcony festival,’ so OnePlus brought festive cheer to Snapchatters in India by allowing them to send out their Diwali greetings from their own balconies. Snapchatters picked words of positivity to create their custom Diwali wish and then released it to the sky, watching it transform into a beautiful message to share with their loved ones. 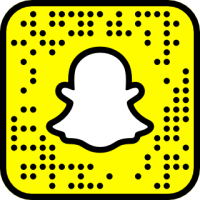 National Saudi Day
In celebration of the 90th Saudi National Day, several brands in KSA launched Snapchat campaigns dedicated to the special occasion, creating engaging AR experiences for the platform to drive anticipation and a sense of unity amongst Saudi Snapchatters. 12 Lenses were developed by partners (including Samba Bank and STC below) with the objective to inspire the world with KSA optimism, resilience and accomplishments.

Reeseter Egg Hunt by Hershey’s Canada
In April, as city-wide Coronavirus lockdowns began to take effect, Hershey’s Canada collaborated with Snapchat to transform the classic Easter Egg Hunt. Snapchatters were given the opportunity to hunt around their real-world environments for “Reeseter” Eggs in a safe, playful way. After successfully collecting 10 eggs, players could swipe up to an instant-win microsite where they were given the chance to win a coveted Reese Easter Egg prize pack. 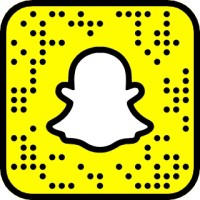 Trolls: World Tour Takes Over the Snap Camera
When the pandemic had just taken hold, Universal Pictures released Trolls World Tour on streaming, rescuing parents desperate to entertain their children at home. The studio brought the Trolls characters to life in Snapchat AR, and, for the first time ever, extended the experience to the Snap Camera desktop app to bring some fun to the new world of video calls and virtual meetings. 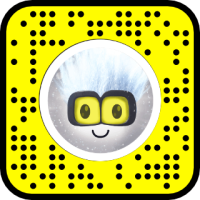