Oh Snap! Sports are Back

How sports fans on Snapchat are adjusting to a different kind of viewing experience. 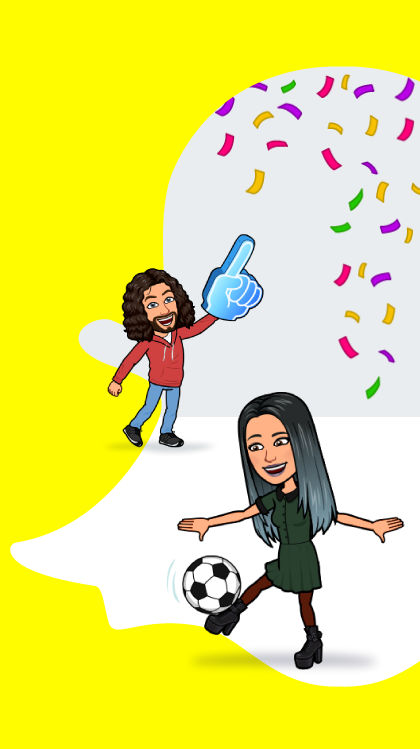 They may look (and sound) a little different, but Snapchatters are psyched to see their favorite teams, sports, and athletes back in action. They’re even checking out sports they normally wouldn’t. Anything that gives them another way to connect with friends and family and keep up some semblance of normalcy. Let’s take a closer look at what Snapchatters are digging, what they’re missing, and what they’d change about the fan experience if they were league commissioner.
From pressing pause to resuming action, sports had Snapchatters buzzing
Within a matter of days in early March, major sports leagues like the NBA, NHL, and MLB announced their seasons would go on pause (soccer leagues in many countries kept to their schedules but played without fans). Big news around the world, none more so than with Snapchatters. When the same sports made their return near August, excitement went through the roof.

Sports matter more than ever
Over half of US Snapchatters (52%) are excited sports are back in their lives, and a third are more appreciative and passionate about their favorite teams and sports.1 Fans in Canada (58%) and Australia (54%) are even more enthused, with over a third of Canadians (36%) and 40% of Australians finding sports more meaningful than before.2 In the UK, a little less than half (44%) are feeling the rush, with a little over a quarter (28%) appreciating sports even more than before.3 Fans on Snap are so excited they can watch sports, between one-in-four and one-in-six are following new teams and sports altogether.4
Snapchatters also feel sports have more meaning because they keep them connected to people they love. Over a third (35%) of US Snapchatters said sports matter to them because it brings them closer to friends and family.5 In Australia, that number is 44%, while in Canada and the UK, it’s 40% and 29%, respectively.6 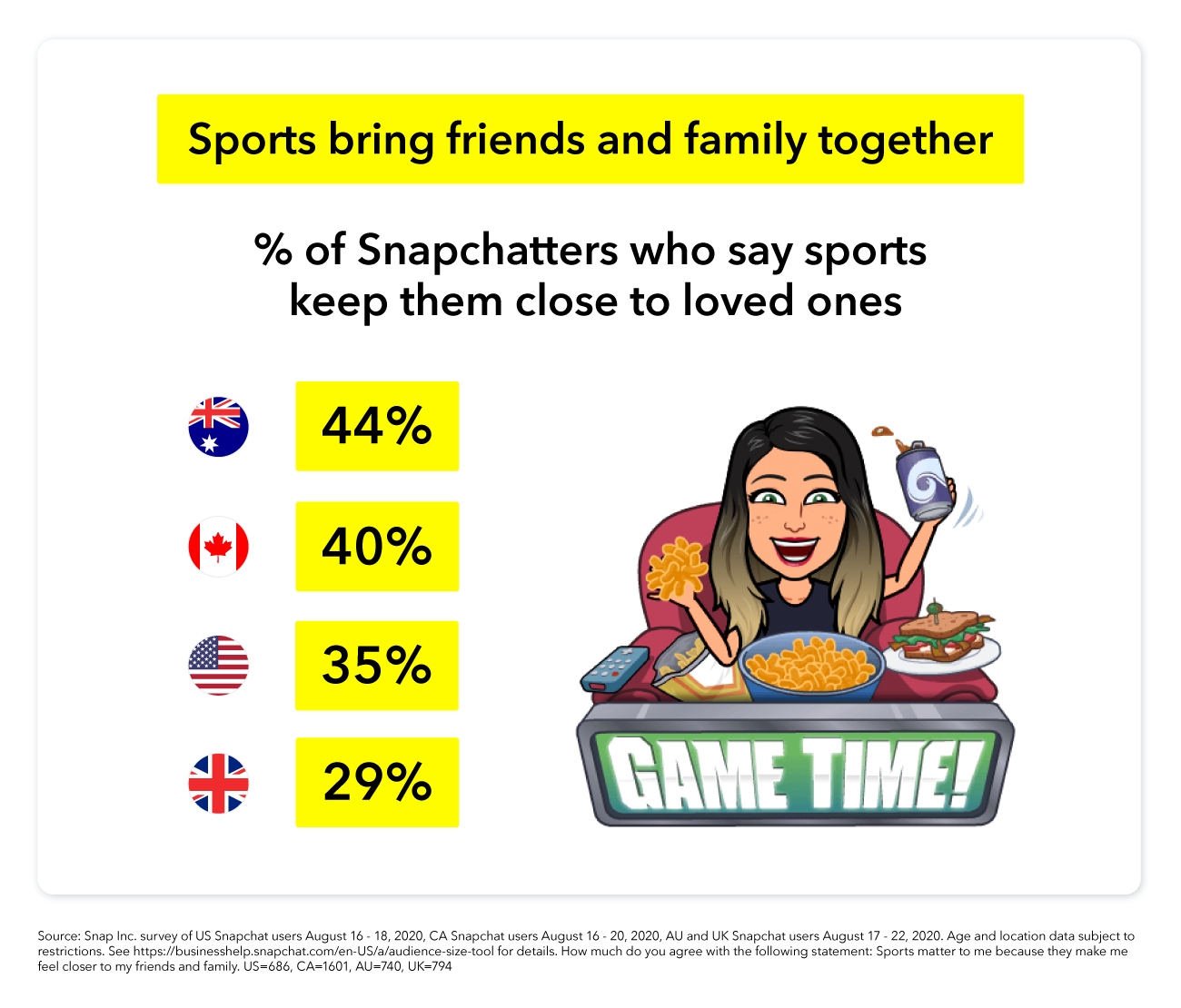 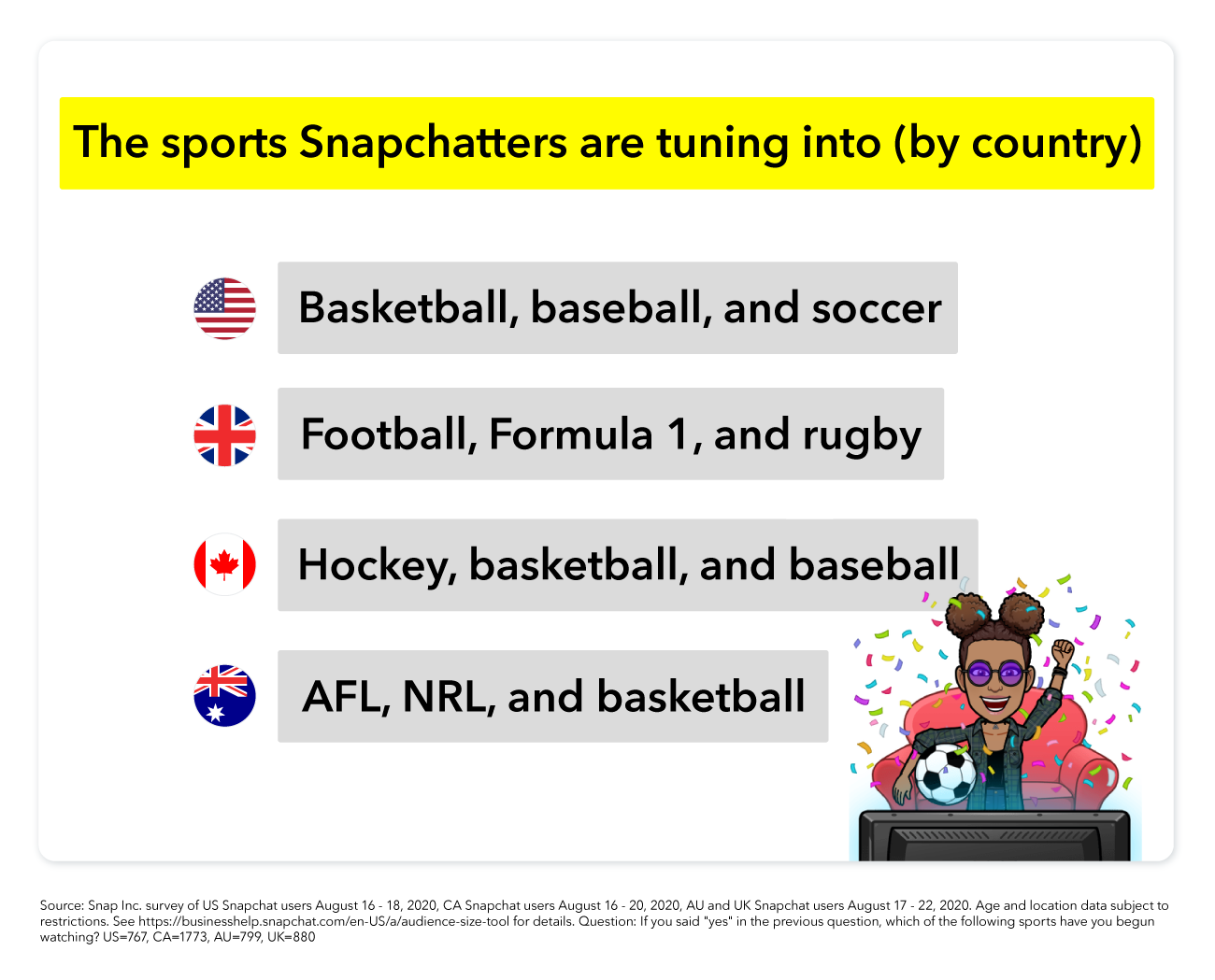 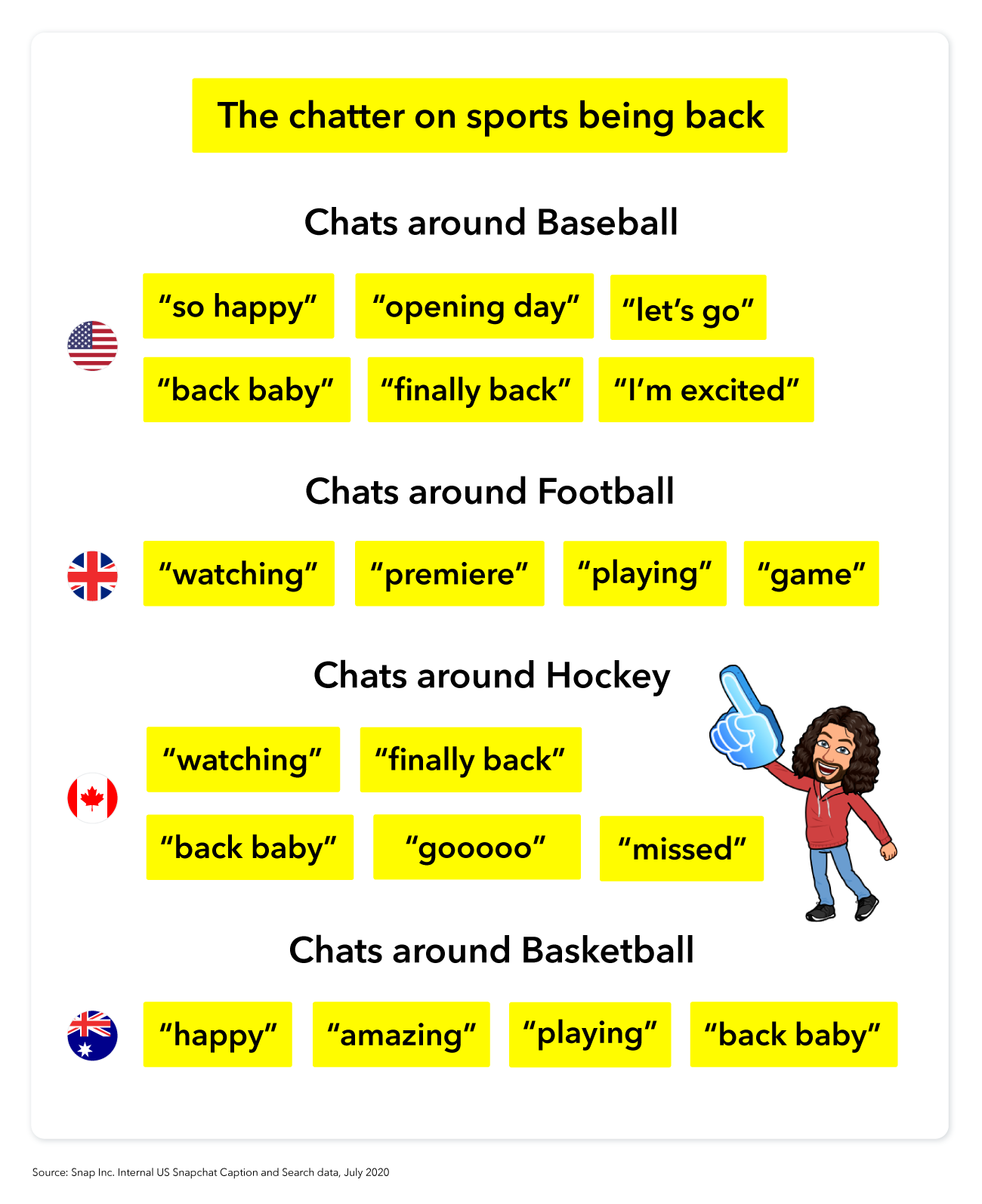 Fan-less sports aren’t quite the same
While fans in these sports-loving nations are glad their favorite teams and athletes are back, there’s something missing… the fans! About a third of Snapchatters think Covid-19’s effect on the games (empty seats, players in masks, pre-recorded cheers) definitely detract from the viewing experience, while a third don’t mind so much.7 Male fans are missing the old life most. In the US, 40% are feeling the effects of Covid-19 on the viewing experience, while roughly a third of male fans in the UK, Australia, and Canada feel similarly (35%, 33%, and 28% respectively).8 But they have some firm ideas on how to improve the fan experience--ideas that include Snapchat.
Snapchatters want to feel close to the action
When it comes to how Snapchatters experience sports in these strange times, they want full-sensory immersion that brings them closer to the action. Over a third of US Snapchatters want enhancements like mics on athletes to hear how they experience the game (with 41% of male fans being particularly into this simple innovation) and virtual fan sections.9 Their North American counterparts in Canada are similarly jazzed for these enhancements, with 36% favoring mics on athletes, 32% up for a virtual fan section, and 22% into pre-recorded crowd noise.10 Demand is similar, if slightly lower, in Australia (27%, 25%, 17%) and the UK (20%, 25%, 15%).11 There’s more to “watching” sports in 2020 than catching the game on TV. The sounds of the game and new digital experiences help offset some of the strangeness of the new norm. They also help transport people from their living rooms into front row seats at a more exciting, connected event.
Snap’s growing role in sports
As it stands, fans make Snapchat a second-screen destination as they watch sports. In the US, for example, Snapchatters send Snaps and Chats to their inner circle (29%), watch friends’ Stories (28%), post their own Stories (20%) and check out Discover highlights and shows (26%).12 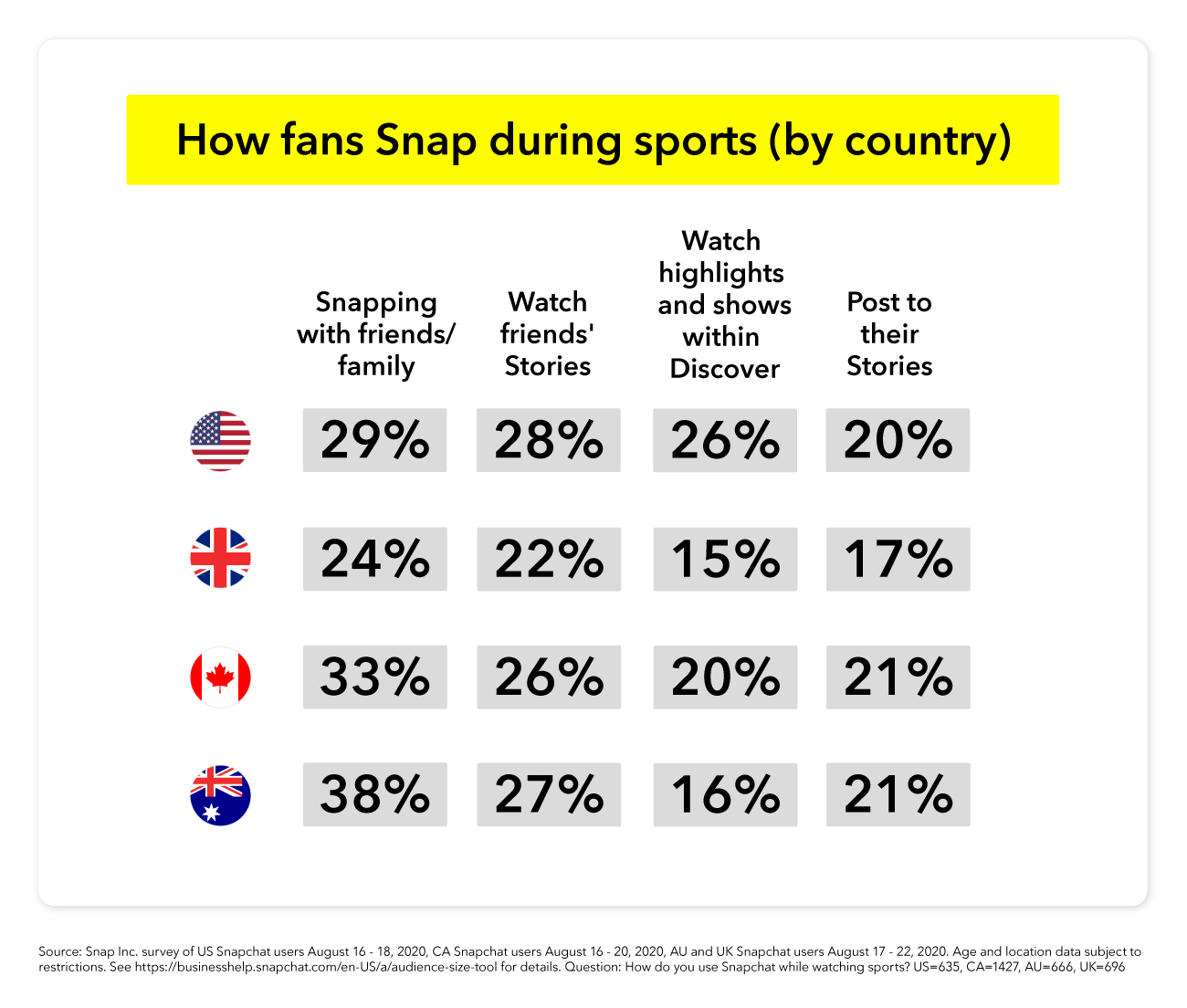 But these fans see other ways Snapchat can make sports more exciting. Between a quarter and a third of them want sports leagues to use Snap to go behind-the-scenes, share news and player interviews, and tap into AR that recreates the sporting venues they can’t visit right now.13 When it comes to more immersive, engaging experiences, fans see sports and Snapchat going hand-in-hand.
Conclusion
Snapchatters are thrilled to see their favorite teams and players again. They’re still adjusting to a different kind of viewing experience—they miss seeing fans making noise on TV, and they probably wish the seasons could be longer—but it’s nice to have something to root for and connect over. And when it’s all said and done, maybe the changes brought on by Covid-19 will make for a more innovative, engaging kind of fandom in the long run.