NRG’s latest study found that on average, movie ads on Snapchat see over 20% increases in both First Choice and Unaided Awareness versus campaigns without Snapchat, normalized for TV spend. These are the metrics most correlated with opening weekend box office.

Film advertisers were the first to adopt Snapchat as a major advertising channel. In fact, Snapchat’s first ad back in 2014 was a Promoted Story for the release of horror film Ouija. Snapchatters are active consumers, accounting for 36% of all moviegoers and 50% of all ticket purchases in the US, lending to Oujia’s blockbuster opening weekend 1 .

As movie campaigns on Snapchat reached critical mass, we’ve been working hard to understand why Snapchat works so well for movie campaigns and how to build even better playbooks for partners. In Q4June 2017, we partnered with NRG — the leader in film tracking and box office prediction — to take this effort further. And today, we’re excited to announce the results.

Most importantly, these increases in Unaided Awareness were found across the board — regardless of genre, how much money the titles made at the box office, and whether the movie featured known or unknown IP. 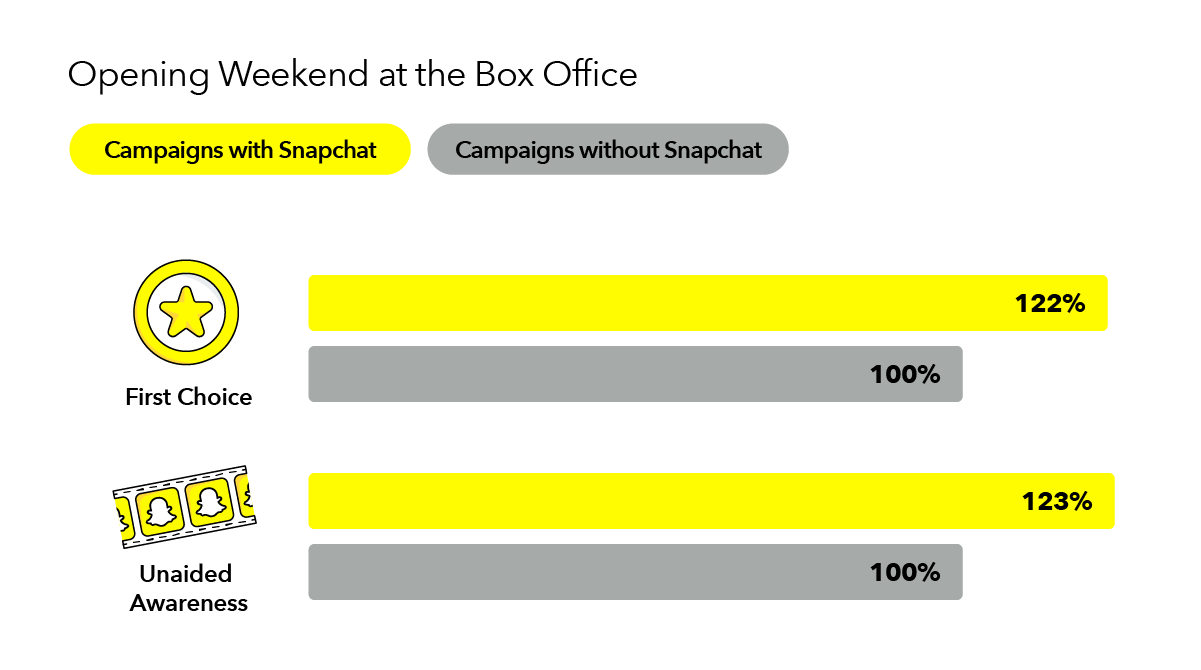 To conduct the study, NRG collected data on over 375 titles released since 2015. Campaigns included varied Snapchat ad spend, media flighting tactics, and creative practices — and the study included campaigns with no Snapchat ads for comparison. NRG evaluated both the impact spend had on overall tracking, as well as the impact spend had for Snapchatters specifically, while controlling for variables like film genres and predicted (vs actual) spend for the film. Finally, NRG normalized the results for TV spend.

“We’ve always valued Snap as a partner to help us reach core audiences,” said Elias Plishner, Executive Vice President of Worldwide Digital Marketing at Sony Pictures. “Now, we can use Snap as a business tool as well, helping us to measure the impact of their ad portfolio over the life of a film.”

In a separate study, NRG broke down Snapchat campaigns by ad product. NRG found that Snapchat campaigns which included a Sponsored Lens drove lifts in both Unaided Awareness and First Choice by 34%. “Snapchat continues to be the leader in AR marketing,” said Amy Elkins, Executive Vice President at STX. “The Snapchat Lens product especially when used with Snap's suite of ad products, engages the movie going audience in a unique yet scalable way that eventizes the launch of our film.”

For studios and movie marketers, Snapchat’s a great place to reach a highly engaged audience, and drive key metrics that can seem to make or break an opening weekend. Nearly 1 in 3 of them recall learning about a movie on the app before seeing it in theaters, and 39% have used the app to share reviews of the movie they just saw. And with our reach and measurement solutions like visitation tracking with Placed, first-party data matching, and brand lift studies, advertisers can run tests and gain insights to better understand their ad spend.

This is just the start of our partnership with NRG and studio clients. Look forward to more news and insights this year demonstrating the ROI of ad spend to drive box office results!